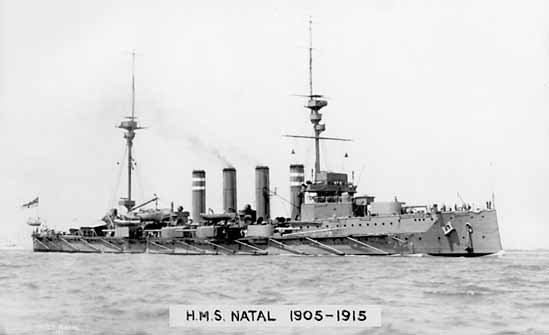 A truly magnificent ship built and launched at Barrow-in-Furness in 1905. The last and finest of the armed cruisers to be built for the Royal Navy Natal displaced 13,500 tons and measured 505 ½ feet overall with a beam of 73 ½ feet.

On 30th December 1915 Natal was lying in the Cromarty Firth with her squadron under the command of Captain Eric Back RN. Shortly after 3.20pm, and without warning, a series of violent explosions tore through the ship. Within 5 short minutes she capsized, a blazing wreck.

390 men, more than half of the ship’s company, 11 women and children and two dockyard workers perished either from the explosions or in the freezing water of the Cromarty Firth. Those bodies which were recovered from the sea were interred in Rosskeen Churchyard, Invergordon.

There was a huge amount of speculation about the loss of the Natal. A mine laying U-boat was thought to be the cause but an underwater inspection revealed massive damage from an internal explosion. Sabotage by German agents was suspected but never proved.

With her hull still visible at low water it was RN practice on entering and leaving Cromarty right up to the Second World War for every warship to sound “Still” and for officers and men to come to attention as they passed the wreck.

After numerous failed salvage attempts much of the ship’s interior was removed. The skeleton of the Natal still lies visible in the Cromarty Firth marked by a radar buoy. The destruction of HMS Vanguard in Scapa Flow on 9th July 1917 in similar circumstances was linked to the loss of the Natal but the cause of the fate of the Natal has never been determined.

A. Cecil Hampshire, They Called it Accident, William Kimber, London, 1961

If you have arrived at this page via a search engine, you can use this link to go to the Faded Genes Homepage